Time for something different.. I've been doing a lot of pen and ink work in recent months..and then a couple of weeks ago I spied my old colouring pencils and decided it would be fun to do something colourful and a bit more intuitive.. the result was 'Avatarae'! 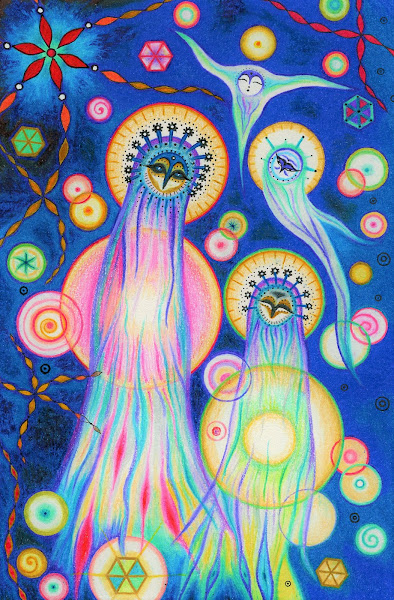 Posted by Gill Rippingale at 14:45 No comments:

Here's a small selection of recent Pendants created from my favourite types of wood - Birch, Box and Holly. These woods are perfect for creating very fine detail, which I do using the spoon tip of my hotwire Pyrography tool.. 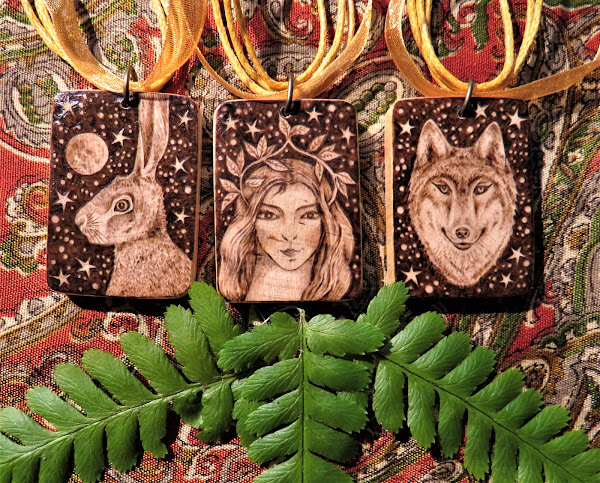 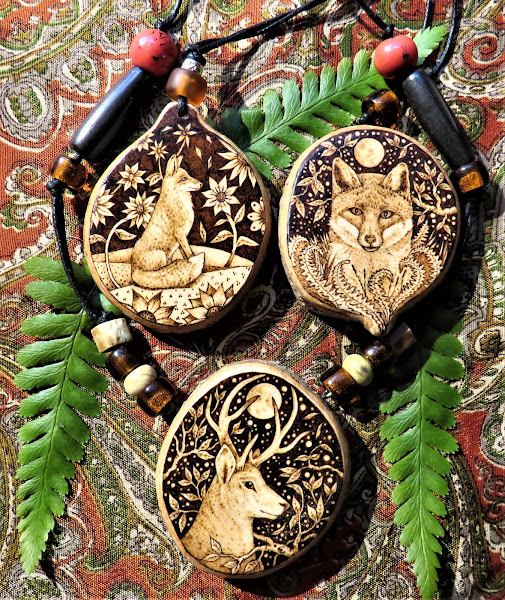 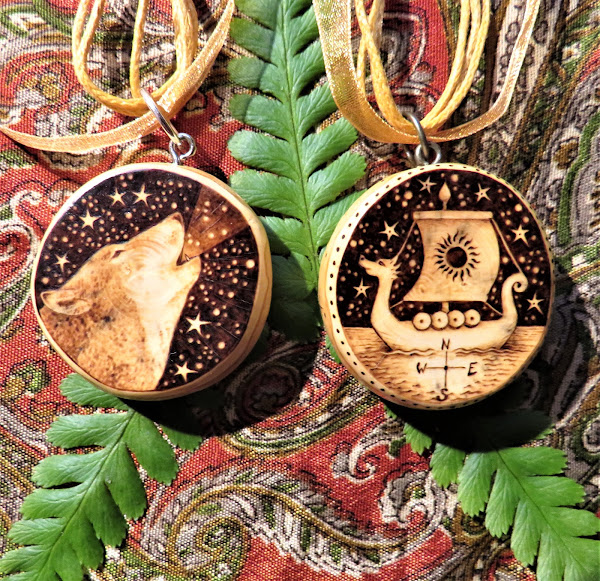 Posted by Gill Rippingale at 12:50 No comments: 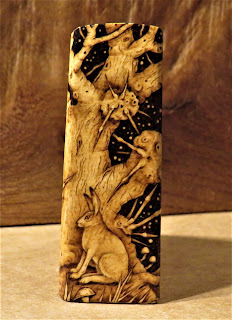 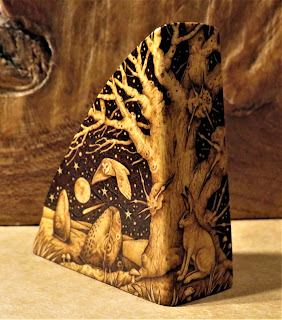 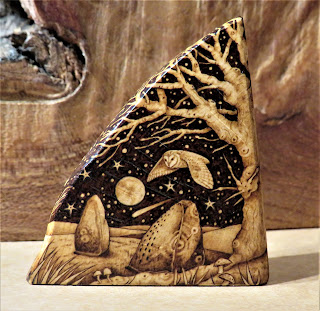 Time to bring you up to date with some of the Pyrography Keepsakes I've been making.

I've been making Keepsakes for a number of years now, and have posted pictures of various pieces here and on Instagram, Pinterest, and my facebook page Hug-the -Tree Pyrography, together with descriptions, but of course the information can get buried quickly!

So perhaps a recap of my methods for making these small art pieces is in order.

I want to begin however by mentioning an important factor (probably the CRUCIAL factor) behind the creation of these pieces, and indeed behind all of my artwork, which is the reason for creating it in the first place..

Creativity is my personal spiritual path and practice, and the way I interact with and interpret the world around me. It's me being me, and an expression of feelings and subtle insights garnered through the interaction of my senses with the outer world, particularly the world of nature- a world which brings me joy and happiness.

I've mentioned before that I've never really lost the sense that creating something that has never existed before and will never exist again seems inherently magical and extraordinary! Making new lines on a blank sheet of paper or wood is wondrous and exciting and utterly compelling!

So, creating a new Wood Keepsake begins with impressions received through my sense of touch.

I have a collection of small, oddly shaped pieces of exotic or native  hardwoods, such as Holly, Hornbeam, Box (Buxus) Hazel, Pear, Apple and Pyracantha. They usually retain some bark on one or more sides, and are sliced through or with the grain, or both. The side with the bark will be rough, pitted and greyish in colour, and the other sides will be sanded smooth and will often show growth rings and patterns. Even at this stage, before any artwork has begun, each of these pieces is unique, with it's own history, it's own life and it's own beauty.

I handle my wood pieces frequently, sorting them out ,turning them over in my hand, gazing at them..admiring them, and eventually I select a particular piece to work on. More sanding, using the finest grades of sandpaper creates the smoothest of surfaces, beautiful to behold and to touch. And now I begin to take in the shape, the colour, the patterns of the grain and allow these impressions to work together to conjure an image. Images may or may not arise - some wood pieces remain in the pile for years!

When I do have an initial impression or idea, I'll visualise how the design might fit and work with the particular shape of the wood piece. If the design is going to cover three or four sides , I need to have a rough idea of where particular elements of the design will look best. The top of a wood slice becomes an extension of the main face. The left and right sides can also be treated as an extension to the main face. Even the base may be incorporated as an extension of the main face, or it may be treated as a separate design.  For instance, if the main face will feature a woodland scene with trees, I may extend the roots down into the base. I often do this, and include a little sleeping mouse or creature among the roots. But I may decide on a two in one design, with unrelated images on different faces of the wood.

It's time then to take up my hotwire pyro stylus and begin the burn! It's always exciting to begin work on a new piece of wood and I quickly become absorbed in my work as I work around the outlines with my stylus, I always fill in the background first, which is almost always a dark starry sky and very slow and detailed work, as I create the 'stars' as I go..

I often listen to music while I work, and allow other features of the design to unfold by themselves. It's a little like telling a story, making it up as you go along!

When the background is complete ( which might be a day or two's work) I begin adding shade and detail to the trees and animals. This is very slow work! Because I work on such a small scale, lines for animal faces, fur, paws etc must be extremely fine! The only way to create such fine lines is to use the edge of my spoon tip and adjust the heat to a very low setting. The whisker and fur strokes have to be precise and miniscule with no room for error - the slightest slip or line in the wrong place can completely throw out the rest of the features of the animal, and there's no rubbing out!

Concentration is absolute. I frequently discover that I'm hardly breathing! But working like this does require frequent breaks. I get up and leave my work space roughly every fifteen minutes, just for a few minutes, which allows my eyes to readjust.

Those who are familiar with pyrography sometimes ask which tips I use. I create my pieces almost entirely using just my spoon tip. I adjust the temperature settings constantly, and I apply wax polish to finished pieces, but never varnish!

The best woods to use are slow growing, light coloured woods, with not too much grain. I use Holly, Apple, Pear, Boxwood (Buxus) Hornbeam, Pyracantha, occasionally Yew and Birch.

The wood must of course be seasoned, and sanded as finely as possible.

It is quite difficult to show photos that really capture the keepsakes - they are best being held and turned and viewed from different angles, but hopefully these pictures give an approximate indication.. 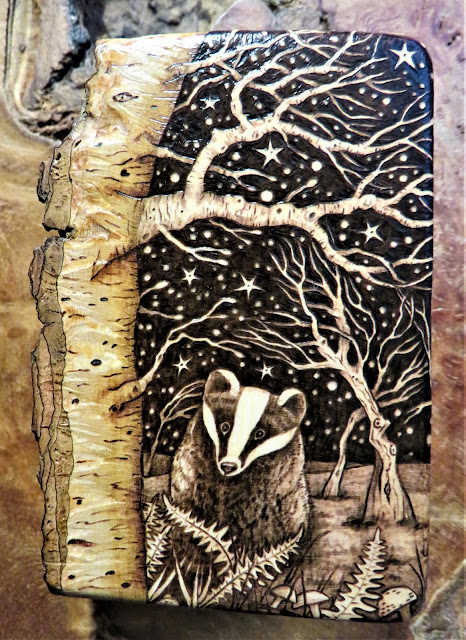 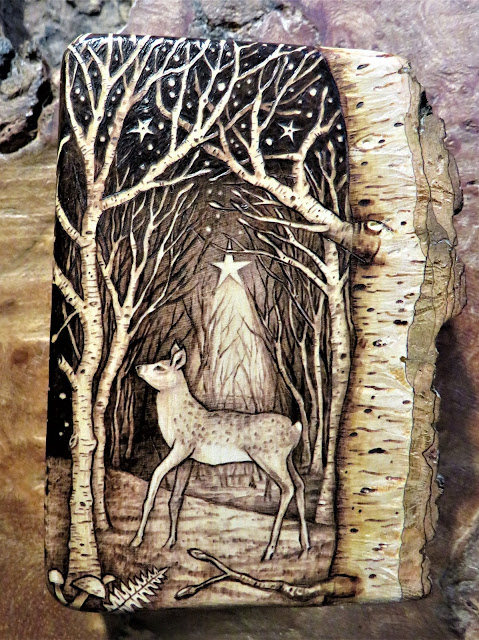 Posted by Gill Rippingale at 12:15 No comments:

Here's a recent illustration which forms part of my 'Forest of Dreams' collection.

The collection features a variety of Woodland creatures who dwell within my mythic realm of 'The Forest of Dreams'. Creatures such as Fox Linden, Tashi Owl and here 'Brindle' the Badger.

These creatures each have a tale to tell and I'm including here a little of Brindle's story...

As Keeper of Firstone, Brindle leads a solitary and secluded life. As a youngster, born outside the Forest of Dreams, he frequently dreamed of Firstone, a sure sign that he would grow up to become Keeper.

When the time was right, the old Keeper, seeking a successor, was guided to Brindle. 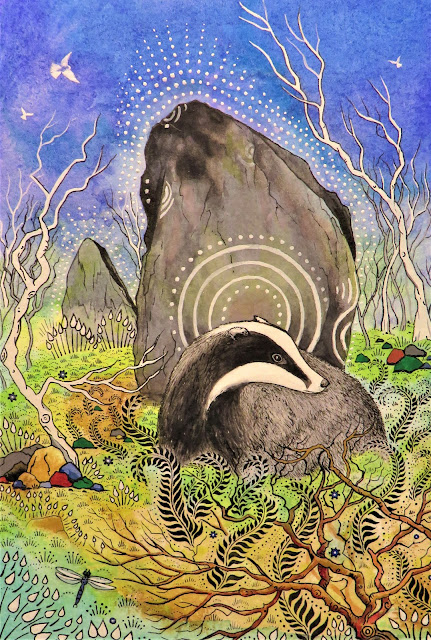 Posted by Gill Rippingale at 13:22 No comments:

I've always been fond of birds of all kinds, but particularly enjoy watching and drawing Corvids!

Over the years I've created lots of artwork, Pyrography pieces and pendants featuring Ravens and Crows - here are just a few.. 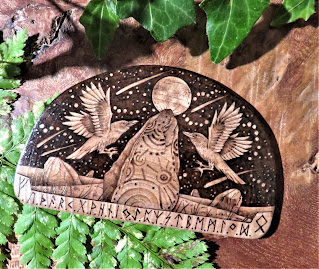 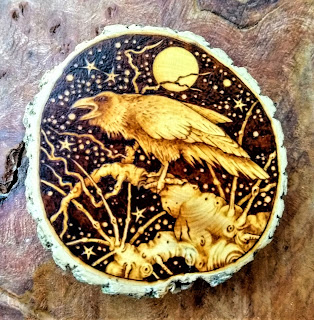 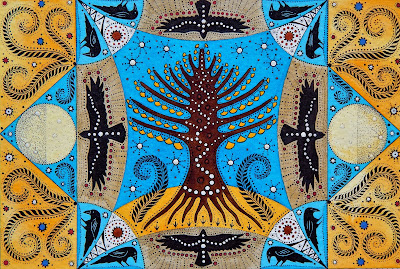 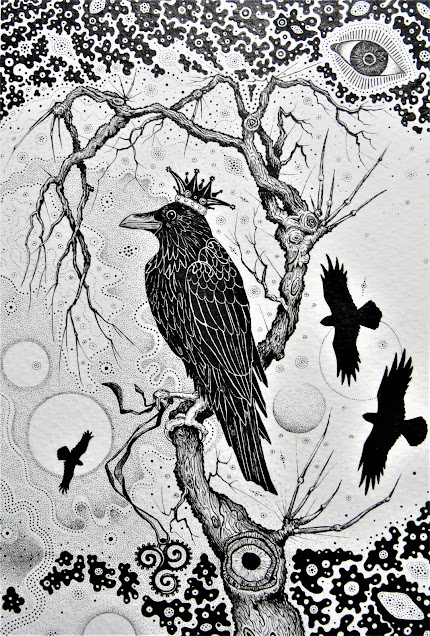 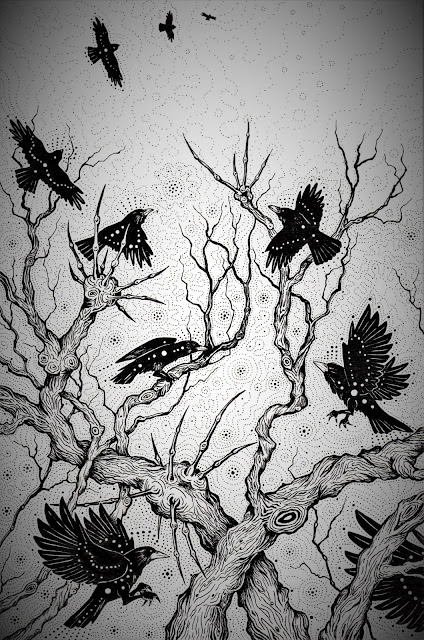 Posted by Gill Rippingale at 13:35 No comments:

Pen and Ink Drawing 'Guardian of the Reef'

Having lived beside the sea for nearly two years now, my imagination has recently turned towards the ocean in all it's wondrous complexity, diversity and mythologies.

It was merely a matter of time before a sea themed drawing arose..and here is my first piece of artwork featuring sea creatures and a Mermaid!

I used my usual watercolour paper and Rotring Isograph pen  for this one, and have named it 'Guardian of the Reef' as I wished to convey something of a relationship between Mermaid and the creatures of the reef where she dwells. I like to think of her as taking on a caring role here... 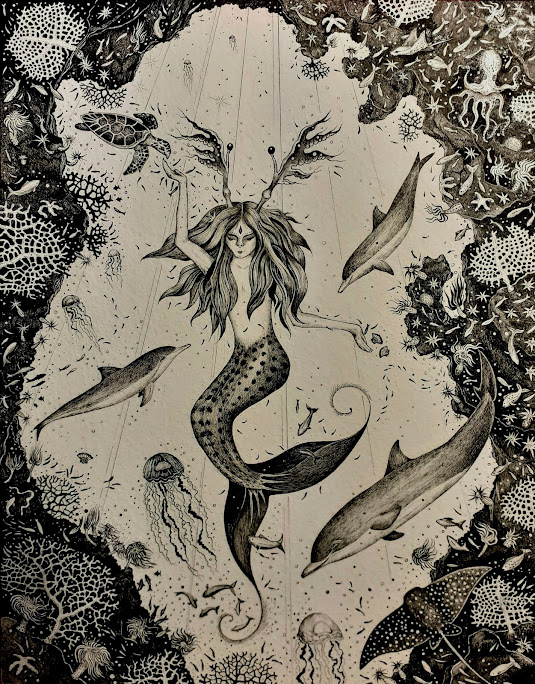 Posted by Gill Rippingale at 11:57 No comments:

Over recent months my time has been split between Pyrography work - mainly making jewellery and Keepsakes for sale in my Etsy shop 'houseofthegreenlady', and Pen and Ink drawing.
Some of these designs I have printed for use as Greetings Cards and gift tags, and some are offered for sale as small prints, occasionally I offer originals for sale. 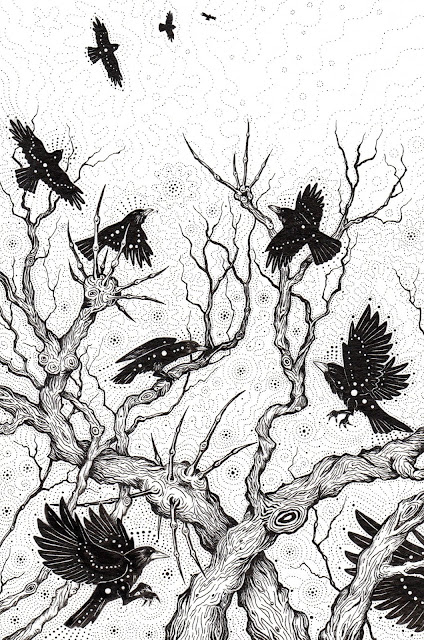 I'm back to my old stand-by, pen and ink work!
Fond though I am of bright colours, I sometimes feel that the use of colour in my drawings can add unnecessary complications. Using only black and white does present a welcome challenge to the design and also results in a very traditional looking drawing or illustration well suited to my favourite subject matter.
I very much enjoyed working on 'Place of Grace' and was quite pleased with the finished drawing. 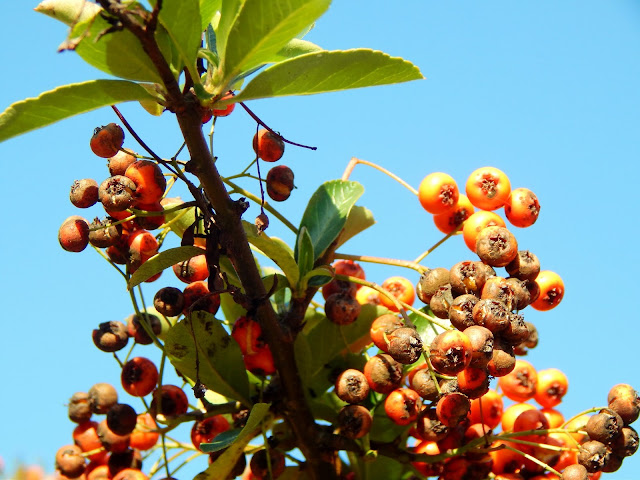 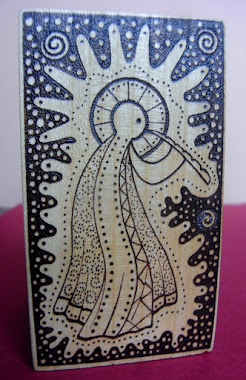 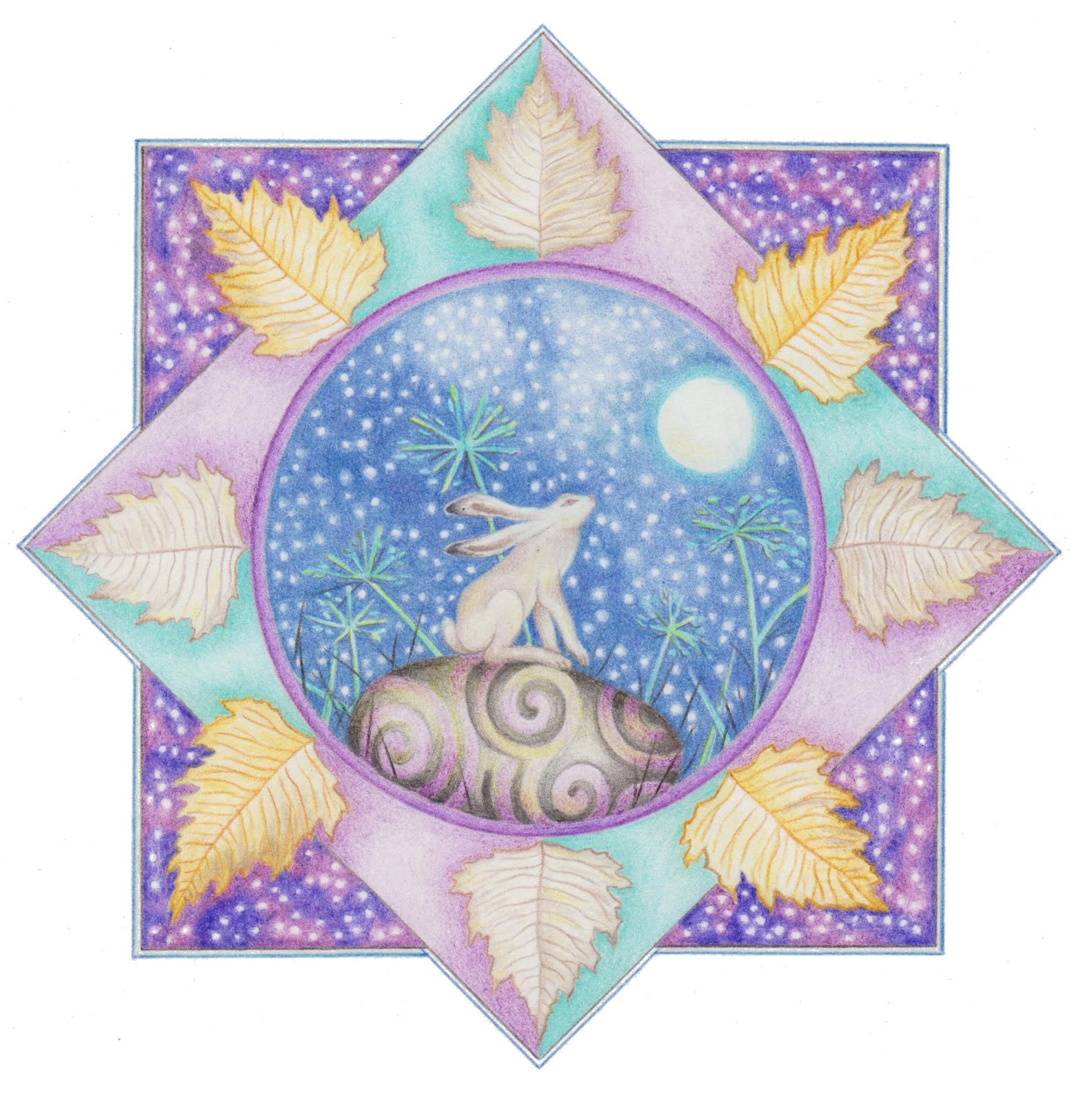 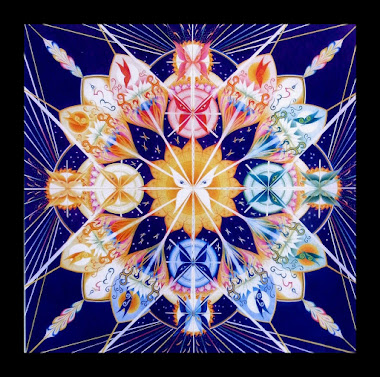 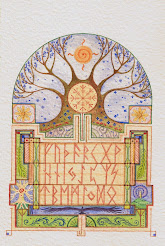 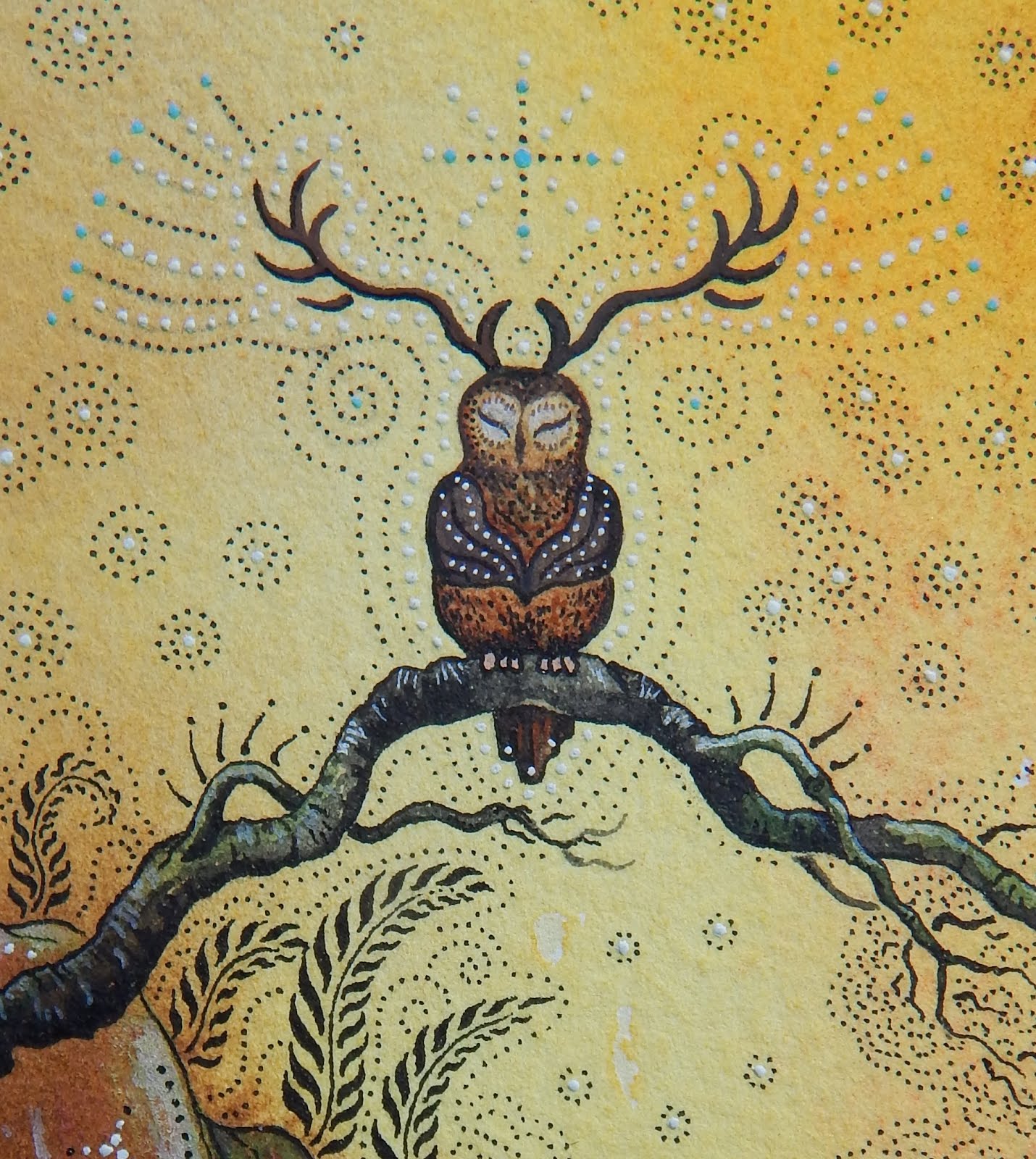